Posts for Tag : Back Ache

Once Upon a Time … 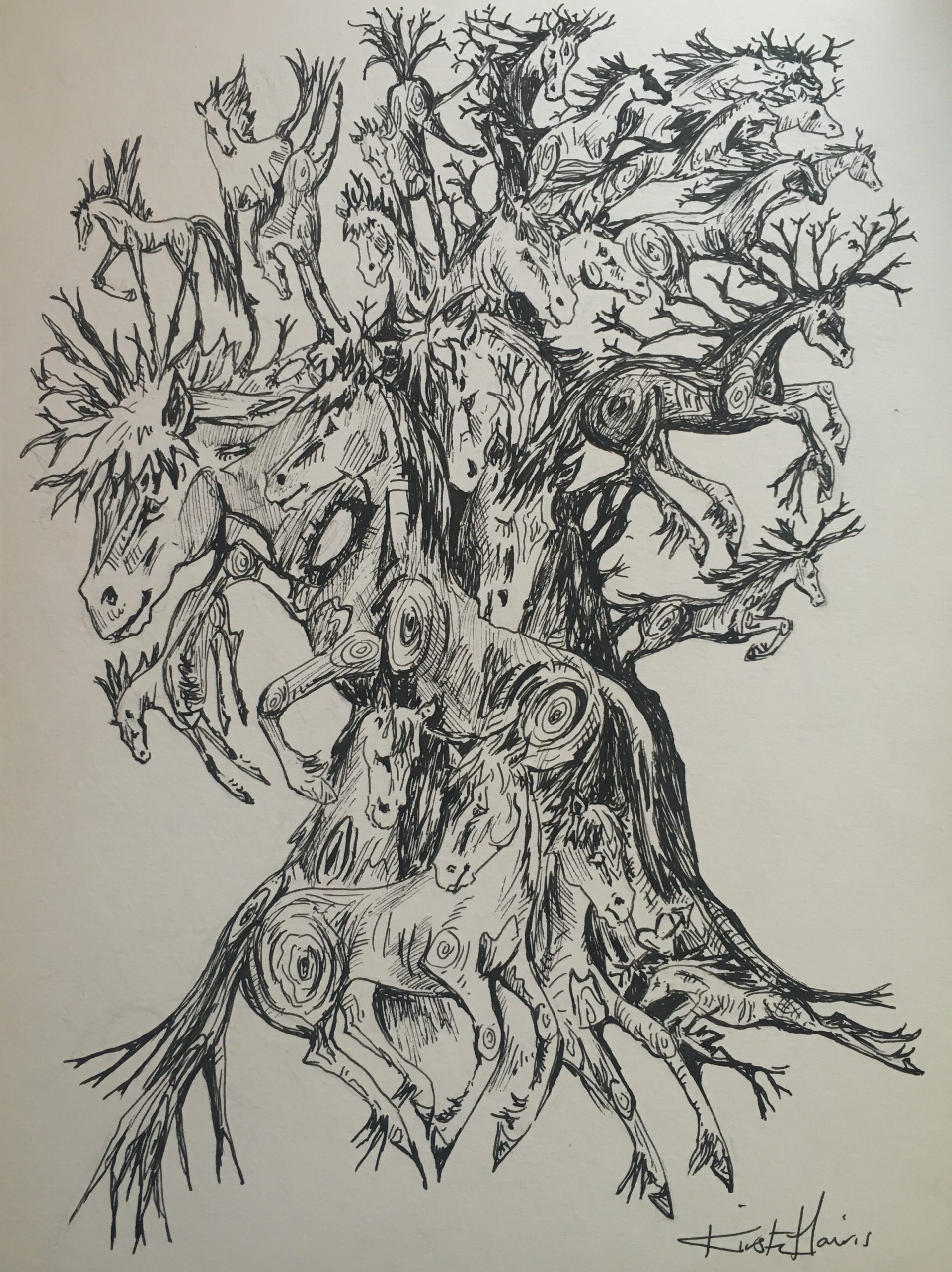 Once upon a time, a long time ago, in the frozen lands of Scotland, a young woman found herself trapped in a dark and terrifyingly lonely forest. Sharp, searing thorns ripped at her back, pulling her this way and that, completely stopping her from moving.  She was lost, stuck, scared and in horrendous pain. The harder she tried to break free from the fearsome binding wilderness the more it entangled her. She tried everything, even ignoring and suppressing the pain it inflicted, but it just gripped her tighter and tighter. She felt utterly lost.

One day whilst trapped in the forest she met a witch, who was really a wise woman in disguise. The witch spoke to the girl and gave her a very strange message – She told the girl to keep saying ‘I let my neck be free’ no matter what!

‘What strange words!’ thought the girl. ‘I let my neck be free!’ Oh well if that is her best magic spell I better give it a go –  I have absolutely nothing to lose and you never know it might work!’

One day a beautiful shining magical sword appeared before her.

‘Pick me up and use me, I am the transformational sword of your thinking’ it whispered.

As she picked it up the girl thought she could see a tiny glimmer of light through the thick gnarled impenetrable branches of the forest.

She realised in order to reach the light she had to use the sword to get through the entangled forest, cutting through the twigs and branches one by one. Not only that, but she had to go deeper into the painful knotted wood and not be frightened of its fearsome voice and cry, but to listen to it, to face it with courage.

She picked up the sword with her mind’s eye, and started to use her thinking to cut pathways. Her body was the forest and her rapier like mind her way to free it from the painful strangle. She had to trust that her mind was brilliant enough for the task ahead. She came upon dead end after dead end. Dark places engulfed her, but she had no choice but to be brave and patient and keep moving forward into her thinking. The girl started to see the pain as her friend, a friend that was calling for her attention, guiding her mind as to where to travel.

‘Come into me’, it shouted, ‘step into this pain in your neck, let your neck be free, travel through this howling in your back, bare the darkness and see what happens. Keep stepping forward into my call for only then will I allow the light to appear. I cannot shout any louder for you to hear me. Pay attention, I am your friend in disguise.’

She stopped struggling staying still and quiet allowing her mind to be free in the darkness. Any desire to move or run away from the pain she learned to ignore, instead she wrapped her mind around it, exploring, spiralling, mentally dancing with the pain, letting her consciousness be it, feel it, find its story.  Her tenacity started to pay off and slowly over time a clearing emerged in the forest that was full of light and shimmering beauty. The pain had disappeared in that place, and then the next and the next …

Little by little she started to find a path out of the entangled forest as she learned to follow and play in the the branches of her nervous system, finding a wonder world, a labyrinth of stillness, possibility, light and illumination.

The girl was uncovering her own enchanted tree in the magical forest of life. It was not the scary place the pain had made her think it was.

Pain had become her transformation and her salvation and she learned to thank it for the kindness its voice was really presenting and all that it was teaching her.

This is my story, my journey with the Alexander Technique as a 24 year old.

How to Be a Flop! 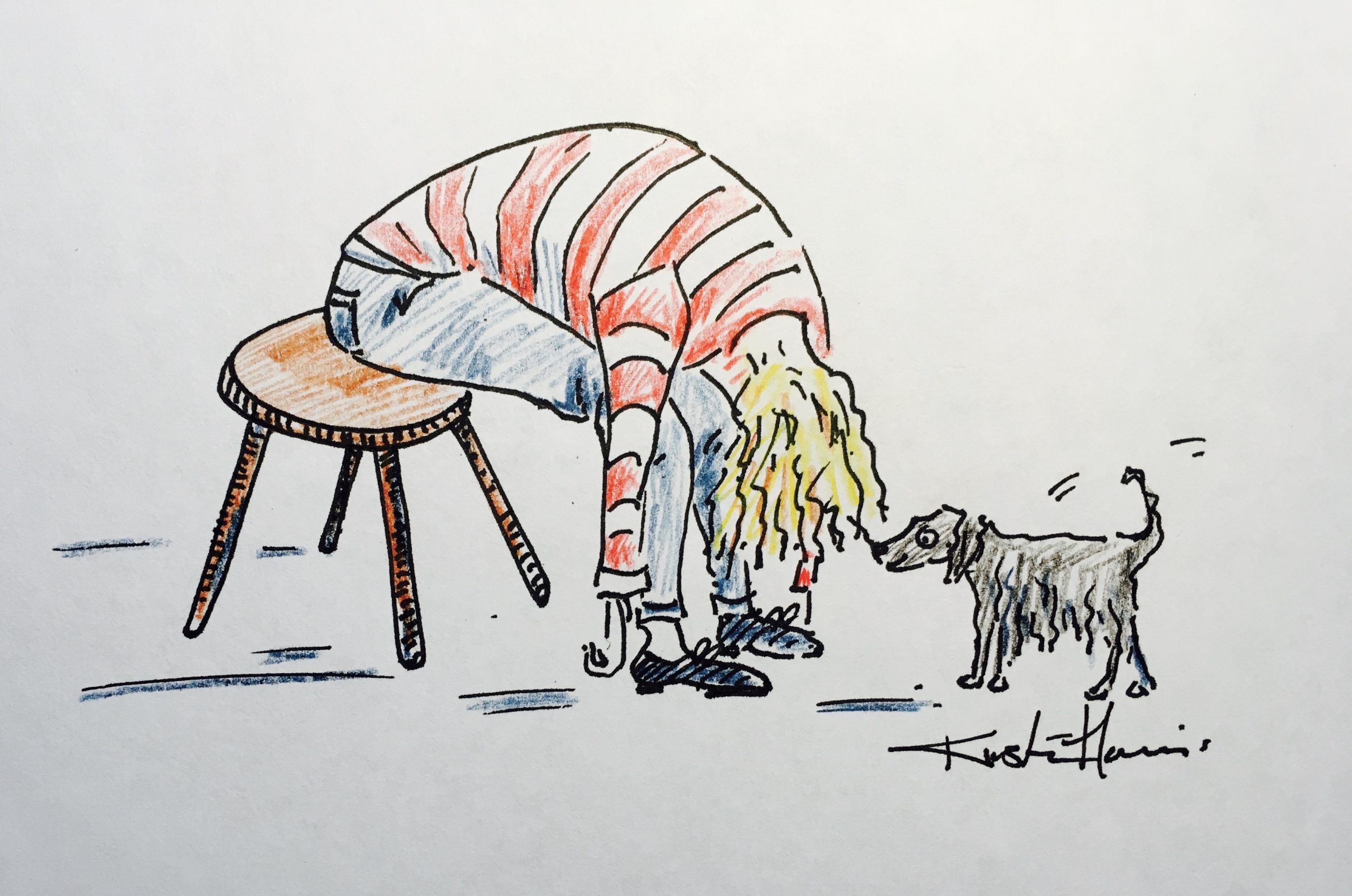 How To Be A Flop, Cartoon by Kirsten Harris

Instead of a ‘how to be a success’ blog I thought I would write one about how to be a flop! Let’s take some pressure off and hopefully make life a little easier. It’s really much easier being a flop after all!

So, what if it was absolutely OK to be a flop at work, at home or at school? What if being a flop is actually a way to achieve more success? What if people actually saw your flopping as wonderful self care! A little bit of daily ease!

So when the pressure gets just too much why not just give up for a bit and let yourself flop over. Sitting on a chair is the easiest way. Simply let yourself hang out for a bit with your head between your legs and let go.  People will probably ask you if you are ok but that’s ok. It feels good being floppy, quite a relief really. So don’t worry what you look like, go ahead, flop!

Let your neck be free so your head can really hang…

Let the weight of your arms hang heavily, freeing your shoulder muscles and stretching the connective tissue around the shoulder blades, an area that can get really tight…

Let yourself breathe out, big sighing out breaths easing the ribs…

Let go and give up being an upright person for a bit and enjoy the view from between your legs!

Congratulations you are now a flop!

If you have a cat or a dog they will probably want to lick your face as you are now at their level and they think that is very exciting. Just a mini hazard of your new found flopdom.

STRANGE BUT TRUE – if you imagine looking up your nose, you will get more of a releasing stretch on the back of your neck!

It feels great being a flop. Really it’s a giant relief to take time out for a minute or two.

When you want to come up again, think about rebuilding the spine slowly from the bottom up … like a tower block … vertebrae by vertebrae…one bone at a time … one on top of the other … leaving your head until last so that it can find its balance point on the two rockers on the base of your skull.

I recommend you let yourself be a flop at least once a day. It really is jolly good for your daily ease!

The Daily Ease A Walk in the Woods Colouring Book with Alexander Technique inspired words is now HALF PRICE, ON SALE Here –

Please email me if you are interested to buy kirstenfharris@btopenworld.com